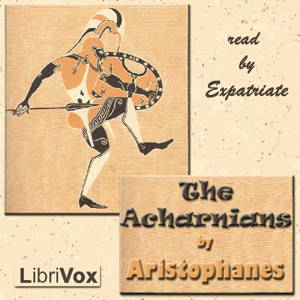 LibriVox recording of The Acharnians (Billson Translation) by Aristophanes. (Translated by Charles James Billson.)
Read in English by Expatriate

Loaded with cryptic, nearly indecipherable inside jokes and double entendres, this early comedy of Aristophanes has a simple, anti-war premise that resounds down the centuries. On flimsy pretexts, greedy politicians have embroiled the nation of Athens in war after war after war. Dicæopolis is Everyman, an ordinary, plain-speaking citizen fed up with the bumbling, belligerence, and insincerity of the professional leaders. He decides on a whim to make a separate peace with Sparta all by himself, returning with a treaty good for thirty years. Envious of the good deal he has made and of the profit he sees from it, other Athenians try to buy packets of his peace from him, with no success. Puffed up with his own cleverness, Dicæopolis spends the final scenes of the play ridiculing the muscle-brained neanderthal General Lamachus for faux patriotism and comic chest-beating heroism. This translation is by Charles James Billson, who admits in his preface with obvious regret that the chilling effect of “modern Protestantism” had forced him to prune out the more risque and bawdy bits of Aristophanes’s lines, particularly most of the “Phallic Hymn.” He tries to make up for this unfortunate lack, however, by filling the play with rhyme patterns and slang borrowed from the “burlesque” halls of the 1880s, hoping to render the difficult Greek humor into the form of “a lively acting play.” ( Expatriate)